Lulu, Annie and Frankie The Tooth

About Ellen Gerstein: A snapshot look

I was born in The Bronx, (I thought everyone was), and kidnapped by my parents when I was two years old and taken from New York to Miami, so I could perspire and have my hair frizz up for my formative years. I was extremely shy, no one would believe it now, but I was. I spent most of my childhood with horses. I taught horseback riding and worked hauling horses to competitions. I had a two-horse trailer and an old red and white convertible Ford, I named Betsy – I loved that car, wish I still had her. So I had horses, rode horses and showed horses. I was the youngest rider to win the Florida championship from age 11 to 13 in the 5-Gaited Show Horse Division. After that I became the Florida State reserve champion in Western Pleasure. From about age eight to 17, horses were my life. Wow, was I ever fortunate.

I went to school at The University of Georgia.  I had never been to the South, everyone I knew in Miami were from New York. I had some very interesting college years, to say the least. I started a tutorial program for underprivileged kids and started Georgia Students for Human Rights. Part of my experience in Georgia was working at Sizzler’s Steak House – Oh yeah! I was the salad girl. Ok, the problem was, I don’t talk slow and know one understood me when I said these incredible and engaging words: ”would you like Italian, blue cheese, French or Russian dressing?” – they would say, “What the heck did she say?”

From there I graduated and… HELLO NEW YORK!!! I lived in The East Village, in an apartment with about 2,000 roommates so we could afford the rent. I was a social worker for the NYC Department of Welfare. I had a huge caseload and made monthly visits to everyone (whether they wanted me to or not). I loved my job. After six years of working and a few years of therapy, (back in the day everyone was in therapy), I decided to go for it… Do what I really wanted to do, BE AN ACTRESS!!! As Dr. James Spingarn said, “You don’t want to wake up and your 80 and you never did what you wanted to do in life, that would be bad.” Sooooo, I took myself to acting class with Lee Strasberg. I studied for five years in New York and LA, I loved it, (to put it mildly). Tremendous acting experiences, and life experiences. I am really lucky. I absolutely love studying my craft, I always want to be the best that I can. I also studied script analysis with Stella Adler that was very important. At that time you studied for at least a few years before you got pictures taken and searched for an agent and work.

Yet, at some point I thought it would be fun to do stand-up comedy. I had a lot of fun, and I met an unbelievable amount of people that needed a good laugh! But acting was always my first love, so I continued down that path.

For some reason, I thought I could save money going to a therapist if I became one, then I could just talk to myself, (creative thinking at it’s best!). So, I went to graduate school at night, so I could be free to do my acting during the day. I became a psychotherapist. 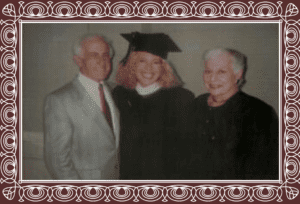 Ellen Gerstein with her mom and dad at Graduate School of Psychology graduation at Antioch University.

Animals are another one of my passions, all kinds. I grew up with a mom, dad and sister who loved animals. We had all kinds of animals as I was growing up. Hamsters, birds, turtles, fish, dogs, cats, and of course horses at the stable. I’ve rescued many dogs and helped pay pets veterinarian bills so they can be healthy and adoptable. I guess I’m still a social worker at heart. I adopted two elephant orphan babies Mutara and Shukuru at the Sheldrick Wildlife rescue in Kenya.

In 1989 my sister, Joan Carol Gerstein passed away. I carry her in my heart always as I do my mother and father. I developed a yearly scholarship in my sister’s name at her Alma Mater, Barry University, in the School of social work. She was also a Social Worker who worked with battered woman.

I settled in Los Angeles quite a while ago, made wonderful friends and bought a little house. Several years ago I completely leveled my house and built a new one…still little, with charm and warmth, which I LOVE. I am very happy living here with Frankie “The Tooth” sort of Pugish and before that with Annie, a rescued Australian Shepherd / Chocolate Lab, and Lulu, an almost Dachshund.

I am lucky to do what I love, because I believe success, is doing what you love.