ABOUT I started as a social worker in New York, it fueled my passion and sense of humanity. After many years in therapy, and I mean many, I knew what I had to do, Disappoint my mother and become an actor. As if being an actor wasnâ€™t punishing enough, I decided to be a filmmaker. Acting and filmmaking are my heart and passion! 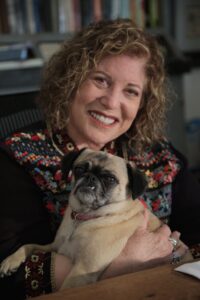 ACTOR (Reel ) As an actor I have worked with some incredible talent in Film, TV and theater. I studied with Lee Strasberg for acting and Stella Adler for script analysis. I am a lifetime member and audition judge the recipient of the prestigious Robert Proski Character Actor Award.

WRITER I write film, television, theater, shows, poems, I even wrote a song for one of my films. I canâ€™t stop writing! Love of life inspires me to write dramedy about real life that make you laugh and cry.

DIRECTOR (Director video from the top of the directors page) I am proud to be the director of two international award winning short films,Â Waiting For RonaldÂ andÂ Come Away With Me as well as my award winning one-women show, My Psychotherapy Comeback Tour.

Under the banner of Lulu Productions my projects have included film, documentaries, theater, web series, and music videos. My latest projects are a pilot, Just South of Normal, the features Cookieface, Big Al, HipHop and Her, Custody of Connie, Web series, Globetrotting from Home With L.E Sue and Has Anyone Seen Dr. Jeannee Sebel.

SYLVIA Sylviaâ€™s Just Sayinâ€™, a comedy web series. Iâ€™m Sylvia Utnik, an extremely opinionated and outspoken single lady. Being in the â€œNOWâ€ is of the utmost importance to me. Iâ€™m a wonderful, inspiring feisty character who combats ageism. Iâ€™m an action hero! Youâ€™ll laugh your tushie off watching me. Iâ€™m all about â€œGossipinâ€™â€¦ Gabbinâ€™â€¦ Gigglinâ€™ and Gettinâ€™ Real!â€

ACTING WORKSHOP I wanted to share my love of acting so I developed the Ellen Gerstein Acting Workshop, for over 25 years the workshop has had great success with both adults and children.

Lots of doses of roses

You just can't beat a sunny day. â˜€ï¸ After you

Masked up and out of the house!